Examining How the U.S. Came to Love Mexican Cuisines

It’s hard to imagine a house party without some nachos and margarita. I doubt you can even call it a party in the USA if you can’t dip your nachos in a savory salsa.

You will probably not find anyone who hasn’t ever tasted and loved burritos or maybe made his own version of guacamole.

This is how impactful and popular Mexican cuisine is in the United States that a lot of our activities are associated with it.

So there is this lingering of how the US came to love Mexican cuisine. Because if you think about it, it couldn’t have happened overnight, right?

A Look Back in History: How Did Mexican Food Become Popular in the US?

In terms of popularity, Mexican food can go head to head with that of the Italian and Chinese Cuisines.

According to an analysis of Google Trends data by food magazine Chef’s Pencil, Mexican cuisine is the most popular ethnic cuisine in 27 states, even beating Chinese cuisine to 22.

This is a testimony of how popular this cuisine is. Just look around in your city and you can always find a Mexican restaurant or stall in the corner.

There are even food chains that are dedicated to selling Mexican food.

It’s also not surprising that a high concentration of these restaurants is located in Texas and California. 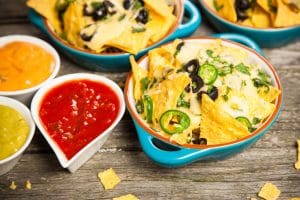 According to historical records, Mexican food reached the United States at least a few centuries ago. And when the Mexican Revolution happened, refugees from Mexico crossed Texas and California. Thus, bringing with them their food culture.

As early as the 19th century, tacos were already being consumed by the Americans. And throughout the years, more food like fajitas and nachos reached the country and thus giving rise to the popularity of Mexican cuisine.

From tracing back into history to examining what it offers, here are some reasons detailing how the people in the US came to love Mexican cuisine.

1. Mexico and the United States are Neighbors

Geographically speaking, the two countries are both found in the continent of North America.

But more specifically, Mexico and the United States are literally next to each other and sharing a border.

So it is not surprising that both countries have influenced each other’s culture, with Mexican cuisine greatly impacting the very diverse food culture in the United States

2. The Power of Immigration and Cultural Heritage

One of the key drivers of why Mexican foods are popular in the U.S. is the flow of immigration.

When Mexican immigrants first came to the country some centuries ago, Mexican cuisine didn’t first reach its full potential. There were only a few Mexican foods that were introduced in several states.

But throughout the years upon the integration of cultures, Mexican cuisine became so popular and well-loved by the Americans.

The Birth of Tex-Mex 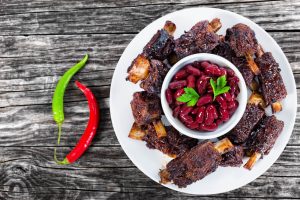 In fact, there is a food culture concept called Tex-Mex blending the cooking styles of Northern Mexico and Southwestern Texas.

The most popular examples of this fusion include fajitas and chilis.

Food is a very significant part of cultural heritage. Mexican-Americans across the country have always been proud of continuously upholding their ethnicity through food, with some of them even opening their own Mexican restaurants.

On several occasions like Cinco de Mayo, you can see the festivities happening all over the country.

During this celebration, houses and restaurants are brimming with every tasty and flavorful Mexican dish and drink you can think of.

Another major reason (one can even say a very obvious one) why this cuisine is always thriving is because it offers so many options. You can say skies are the limit here.

There is literally an abundance of options for every meal of the day, or just any occasion of the year!

If you want an appetizer, you can order or make guacamole and tortillas. Don’t forget your salsa dip because ketchup and mustard are out of the picture.

If you want a heavy meal that will fill you up, there are many vegetable and meat dishes you can choose from.

Burritos, chile Rellenos, Chimichangas, Chalupas, Fajitas, and Quesadillas are some of the popular classics that one can order in famous restaurants such as El Rincon Mexican Kitchen & Tequila Bar.

Of course one can never forget the desserts and drinks.

Margarita is not just a popular drink in the US but also in the whole world. You will always find someone drinking variations of the margarita in events or bars.

Here are some great facts about the history of the margarita.

Meanwhile, churros and flans are top choices for desserts.

When compared to other cuisines like Italian, Mexican is relatively cheaper.

With just a few dollars, you can already order or make several lights to heavy meals.

Plus a great thing about this cuisine is that you can make use of ingredients that are found in your backyard. 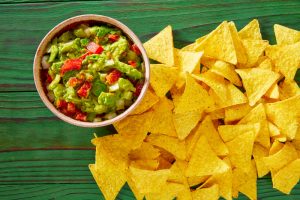 If you have a small vegetable garden in your backyard or property, you can definitely use its fresh produce.

Tomatoes, onions, garlic, potatoes, and peppers are the most commonly used vegetables and spices in most Mexican dishes.

And the great thing about these vegetables is that they are easy to grow and harvest!

And finally, how can Americans love Mexican cuisine if it’s not delicious?

This cuisine is often described as tasty and flavorful because of its overflowing use of herbs and spices. Every Mexican dish is not just delicious but they are also very aromatic.

Sometimes they even say that you need to have a Mexican dish at least once a week. Well, can you watch a movie without some nachos or tacos?

It is not surprising that Americans have a strong liking for Mexican cuisine.

After all, the cuisine is not just delicious but it is also strongly tied with that of the United States’ very own cultural heritage.

Now and in the coming generations, this cuisine will always have a special place in the hearts and on the tables of every American household.

Add this list of Mexican food to your next order online.