How Mexican Food is Different From American Food

The culinary adaptability of Mexican food has impacted its popularity around the world.

In fact, because of its likability, Mexican food and dishes have found their place in American homes, making up a large portion of the diets of many Americans.

In differentiating Mexican food vs American food, one may think that they are seemingly different individually, but because of the fusion of Mexican dishes with American taste and flavor, we can see a closer comparison as they share a number of similarities.

A Brief History of Mexican Food in the United States

We can trace back when Mexican culinary practices were brought to the Southwestern part of the United States, it quickly combined with the local culture to create a new form of Mexican-style food.

This sharing produced a new culinary combination, a hybrid cuisine recognized as Tex-Mex that has eventually spread to other parts of the U.S, and the world.

The Popularity of Original Mexican Dishes in the U.S.

Mexican restaurants have spread throughout the US because Americans are coming to appreciate Mexican cuisine in its original form.

It is even starting to appear in fine dining spheres aside from their fast-food counterparts.

There is a growing appreciation for the flavors and the potentials of traditional Mexican dishes.

This is the emerging trend where younger generations are beginning to favor authentic foods over their American counterparts.

Not only are Americans seeking family-run Mexican restaurants, but they are also having a growing interest in preparing original Mexican dishes in their own homes.

Many have combined traditional Mexican cuisine with American menus for a more delicious meal.

Mexican food takes its origin from the influence of Spain when Mexico was under a long period of Spanish rule.

The Spanish introduced wheat to the natives of Mexico that they used to make flour for tortillas.

But Mexicans have stayed true to embracing their history of spicy food, using chile as an integral part of many of their dishes after Mexican independence from Spain.

Nearly all of today’s American food, on the other hand, like apple pie, hot dog, hamburgers, pizza, tacos, chocolate, steak, potato salad, and much more, originated in other countries.

This includes the ingredients and recipes used to prepare these meals which were introduced to the American shores by colonists, settlers, and immigrants.

Both Mexican and American foods are prepared with ingredients commonly found locally.

American food uses a wide variety of ingredients since its origin is from different countries while Mexican food is usually prepared using avocado, chili peppers, corn, and other fresh herbs and ingredients that are available in Mexico.

In Focus: Similarities and Differences

Mexican food is generally the result of many years as a Spanish colony, hence, the profound Spanish influence in their cuisine.

But even though many recipes are adapted from Spanish dishes, Mexican food is made with ingredients that are widely available in their country.

It also draws from Lebanese and Syrian influences.

American food is the result of a much more diverse influence from different countries because of its diverse population.

This has also influenced the type of ingredients they use in their dishes.

Furthermore, most American foods are constantly changing with a much wider palette of influences.

Tex-Mex is a hybrid cuisine that has been popularized in the United States.

It is a fusion of original Mexican dishes and American taste. Let’s explore some popular Tex-Mex cravings and popular Mexican foods in America. 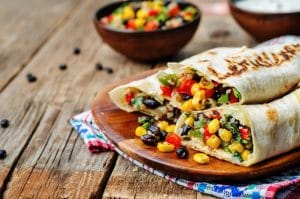 The Americans prepare burritos in a large flour tortilla wrapped around a myriad of fillings like rice, beans, meat, cheese, sour cream, salsa, and guacamole.

The Mexicans call this “tacos de harina” (“wheat flour tacos”)—thinner and smaller and with fewer fillings, sometimes only refried beans and/or meat. They usually choose between a meat or seafood base matched with either one or two other ingredients like rice, beans, white cheese, or chiles.

The original Mexican fajita is a popular dish of grilled meat and/or vegetables served with warm tortillas.

In the U.S., it is served most often on a dramatic sizzling platter with rice, sour cream, and salsa. 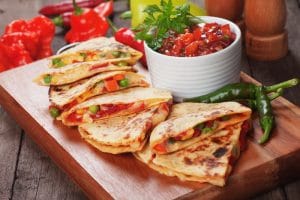 This delicious treat’s name is derived from the Spanish word for cheese (queso). They are both served in Mexico and in the U.S. as a popular snack.

In Mexico, it is made with a corn tortilla folded over melted Oaxaca cheese and served with guacamole, salsa, and sour cream.

The Americans prefer using flour tortillas and fill them with a generic “Mexican” cheese mix or Monterey Jack. 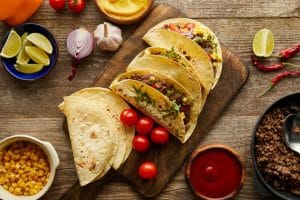 Tacos are an original favorite in Mexico. It is a traditional and authentic Mexican dish that varies regionally in terms of the fillings.

Mexicans prepare them with small and soft corn tortillas that are either lightly grilled or steamed.

Its filling can be made with a variety of meat, including beef, pork, chicken, or seafood, and vegetables like avocados, home-made salsa, and chopped onions, garnished with fresh lime juice and cilantro.

Crema, which is less sour and runnier than sour cream is drizzled on top.

The most common authentic Mexican salsas are salsa roja, salsa verde, and pico de gallo. The most recommended that will beat any pre packaged salsa is pico de gallo—a raw, salad-like tomato salsa with diced and chopped vegetables mixed with cilantro.

Most Americans are familiar with tortillas wrapped around ground beef and cheese and doused with enchilada sauce or gravy for a Tex-Mex enchilada.

Mexican enchiladas are typically tortillas that have been fried and dipped in spicy enchilada sauce and rolled up with meat, vegetables, and/or cheese, then garnished lightly with white cheese and served immediately.

Mexican Food is a Regular in American Homes

The flavor and spice of original Mexican cuisine hit home really close in the U.S. Its widespread likability makes it a large portion of American diets.